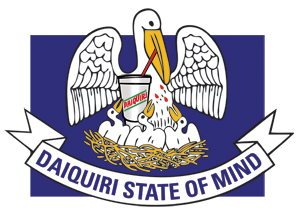 New Orleans generates most of the attention when discussing the emergence of the frozen daiquiri as a cultural phenomenon, but the college towns of Ruston, Lafayette, Lake Charles, and Hammond all offered mass-produced daiquiris before the Crescent City. Those first locations, in cooperation with Baton Rouge legislation, built the frozen daiquiri culture we now live amidst. Louisiana’s unofficial, but most popular, beverage originated in the northern part of the state better known for another entrepreneurial response to our region’s extreme heat: Coca Cola.

One finds quite a lot written about the traditional daiquiri as part of the “craft” trend in the alcoholic beverage industry and occasional commentary on the concept of drive-through daiquiri shops. Far less is written about the process of industrializing the daiquiri. Those who came of age in the Hammond, Lafayette, New Orleans, and Ruston areas during the late 20th century speak of particular shops as being “the first,” but only those from the latter city seem to be both prideful and right. L.L. “Red” and Hazel Williams’  Wilmart Liquor Store played the key role in developing what remains a relatively new part of our state’s culture.

Blended daiquiris became staples in bars beginning in the late 1930s, when the Miracle Mixer, later renamed the Waring Blendor [sic], became ubiquitous. During the 1970s, strawberry, banana, and pina coladadaiquiris were quite popular in the nation’s bars, including Baton Rouge and New Orleans; advertisements often identified them as “ladies’ drinks.” Risqué names derived from fraternity party culture and added shots of grain alcohol were yet to come. In 1977, a Baton Rouge lounge enticed patrons by suggesting that one “try a daiquiri with a scoop of disco.”

The frozen daiquiri revolution stemmed from the already well-established frozen margarita craze. The first frozen margarita machine, developed in the early 1970s by Dallas restaurateur Mariano Martinez, had solved the centuries-old problem of sugar and alcohol not mixing by adding a great deal of sugar. Martinez has received his praise for repurposing a frozen slush machine; his first apparatus now resides in the Smithsonian’s National Museum of American History. The Mexican & Tex-Mex restaurant scene has benefited from the frozen concoction, but life would be bland if bars offered only margaritas and the traditional “fruit-flavored” daiquiris associated with the disco era. This is where the less well-documented genius of Louisiana enters the picture.

The frozen daiquiri associated with Bourbon Street and drive-through stores statewide was born in a once sleepy country store on the outskirts of Ruston, Louisiana, in an unincorporated community named Kelly. Purchased in 1977 by the Williams family, the building was transformed into a liquor store that retained its original general store atmosphere, complete with inviting rocking chairs for Louisiana Tech students and others who might spend some time on the porch. The store remained the only commercial enterprise in the tiny community. Most customers were Ruston residents seeking something more potent than 3.2 beer. Wilmart might have continued solely as a package liquor store if not for a fortuitous purchase.

“In 1979, a liquor company offered a few hundred small bottles of ‘Tequila Sunrise’ mix, which we proved incapable of selling quickly,” explains Dolph Williams, son of Red and Hazel. After stocking the bottles in the cooler had failed, his mother decided to blend some of these mixes with ice at the counter near the register and offer them as a unique impulse purchase.

“The business we had was overwhelming,” Williams remembers. After burning out the motors of several department store blenders, the Williams family moved on to frozen slush machines manufactured in Italy and distributed via a New Jersey company.

Dolph first supplied friends with the same equipment as they set up daiquiri shops in Alexandria and Lake Charles. His success as a distributor led to a visit from a company executive who wondered how one wholesale customer could demand so many machines.

A local newspaper editor insisted that a wire service reporter had to see the crowds of people visiting this country liquor store. A subsequent newspaper story about the throngs, published in the early 1980s, went nationwide. David Briggs, a real estate developer from Houston, read the article and asked for permission to visit the store. After spending two days watching the flow of customers, Briggs relocated his family to New Orleans and opened his first daiquiri shop in Hammond in 1983. The business began with machines leased from Dolph Williams, and the New Orleans Original Daiquiris shop popularized the frozen daiquiri in the Southeastern Louisiana University community.

Most all of the first daiquiri shops to appear in Louisiana relied upon machines provided by the Williams family. Dolph also opened some of his own shops in Shreveport and other northern Louisiana locations, but he did not relish the retail business. From the outset, his mother and sister focused on the mix recipes, and Dolph found his niche working on the hardware.

Many of the hallmarks of the frozen daiquiri business were developed at Wilmart. The tradition of catchy, sometimes off-color names stems from the Ruston experiments. More than once, one of Hazel Williams’ recipes would sell only relatively well with a straightforward name. After she renamed a banana daiquiri “Monkeyshine,” the drink became a hit. By the early 1980s, flavors such as “Jungle Juice”—fruit juice mixed with grain alcohol—and “151 Colada” had become staples. Customers new to the sight of a bank of frozen drink machines, or simply indecisive, were allowed two small tasting cups (four if not too many customers were waiting to order).

Slush machines capable of mixing 4 gallons per hour might work for convenience stores, but they could not keep up with high demand in a period when Louisiana’s drinking age remained 18.

When Dolph Williams asked his suppliers to develop larger-capacity machines, manufacturers scoffed and suggested that they saw no need. Necessity reawakened Williams’ Louisiana Tech engineering education in construction technology. His earlier lessons in calculating and designing bridges proved useful as he created his own version of a frozen daiquiri machine. Beginning with sketches on the back of a brown paper grocery bag, Williams soon had crafted a machine that could produce 12 gallons of alcohol slush per hour. These Ruston experiments contributed crucial innovations to the realm of frozen alcoholic beverages. As stated in his patent filing:

“In order to provide a flowing consistency to the product, it must be constantly stirred. Also, ice crystals must be constantly scraped from the cylinder wall 55 so as to allow more to form. This is accomplished by movement of one or more scraper blades 27 within the interior 47 of cylinder 5.”

Daiquiri Science for Dummies remains to be written, but the general idea is that Williams sought to avoid serving chips of ice in his drinks. Even the teetotalers of Louisiana appreciate the tactile difference between well-shaved “snowball” ice and the chipped ice of “sno cones” most U.S. children must endure. Given that we Louisianans wean our children on an ever-increasing variety of snowball syrups, the daiquiri customer base is constantly being replenished. Aren’t daiquiris simply snowballs minus their “training pants”?

After solving the needs of the Wilmart Liquor Store, Williams began to produce his first batch for customers. By 1982, Frosty Factory of America had emerged. He manufactured the first 20 machines for a Louisiana entrepreneur headed to Tampa, Florida, intent on transplanting the profitable business.

While supervising the loading of these daiquiri mixers onto a truck bound for Florida, Dolph thought it wise to check through his serial numbers; he asked his men to remove #1 for posterity. It remains as a key component of the company’s informal history exhibit. His next two batches of machines were shipped to New Orleans, and many more followed.

Over the last three decades, more than 20,000 Frosty Factory machines have left the Ruston plant. After retiring, Dolph Williams’ sons took over much of the business. Current company president Heath Williams sent his father a photograph via smartphone showing several machines in a beach setting and asked him to guess where it was. Dolph ventured Florida but was told the machines were being installed in South Africa. Thousands more Frosty Factory products continue to whirl away in Australia and Europe as well as throughout the United States. Those used in the Mercedes Benz Superdome and Dallas’ Cowboys Stadium can produce 35 to 40 gallons per hour.

The Smithsonian has yet to request the first Frosty Factory machine, but those interested in visiting the starting place of this cultural revolution should join Louisiana Tech students and head to Wilmart Liquors, which Dolph’s sister, Sueann, continues to operate.

Next issue: lobbying efforts for and against drive-through daiquiri shops.

Michael Mizell-Nelson, PhD, is an associate professor of history at the University of New Orleans.

4 thoughts on “A Daiquiri State of Mind”

The latest from 938 Lafayette Street in New Orleans. Visit www.leh.org for all info on LEH programs.

Louisiana Endowment for the Humanities